Four years ago today, my beat-up old Nissan Pulsar jiggled and slid its way through Melbourne’s cobbled, tram-tracked streets for the first time. The city I had fallen in love with in 2004 and visited many times since was now my home and I was so damned excited.

But cities lose their magic when you live in them. As I’ve said before, the dreams I had of weekends in the Yarra Valley, relaxed coffees in the CBD and wine in the afternoon have not been realised. A large chunk of my time in Melbourne is spent waiting for trains or glimpsing the heritage building lined streets as I rush off to yet another evening of spitting wine into a bucket. I don’t notice the river as I leap into  the pedestrian crossing on Flinders Street. I’ve stopped admiring the old world beauty of Flinders Street Station. Now I only have eyes for the approaching train.

I had heard through the foodie grapevine about a new venue opening at one of Flinders Street Station’s abandoned platform. My cynical mind had already jumped to the conclusion that it would be one of those venues pumping out cheap wine, mass-produced potato wedges and overpriced beers to excited tourists. How wrong I was.

Last week I was invited to the launch of Arbory Bar & Eatery, a new venue that has reclaimed the closed platform previously belonging to the Sandridge train line. A bit like Harry Potter’s platform 9 3/4, it can be a bit hard to find unless you know where to look- approach the river on Swanston street and just before the bridge hook right and down a rather romantic stone staircase to get to Flinders Walk. 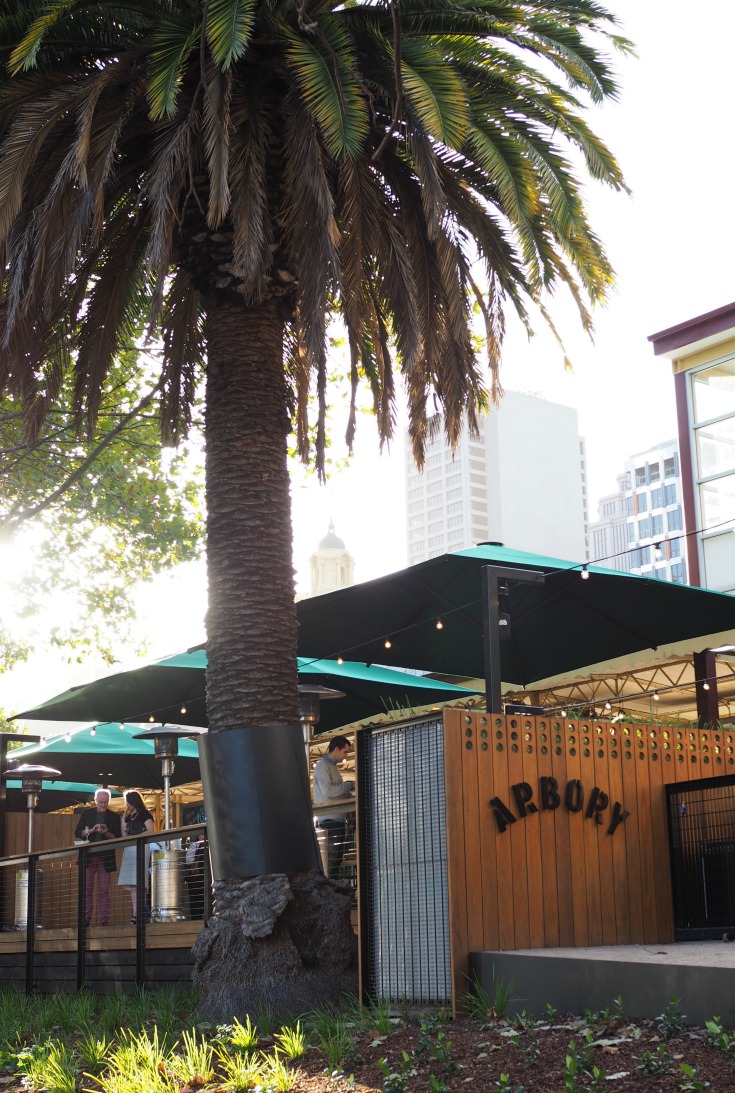 A purpose built shipping container makes up the  kitchen and two bars while the long stretch of decking (150 metres of it) ensures that everybody gets a glorious view of the river.

And what a view… 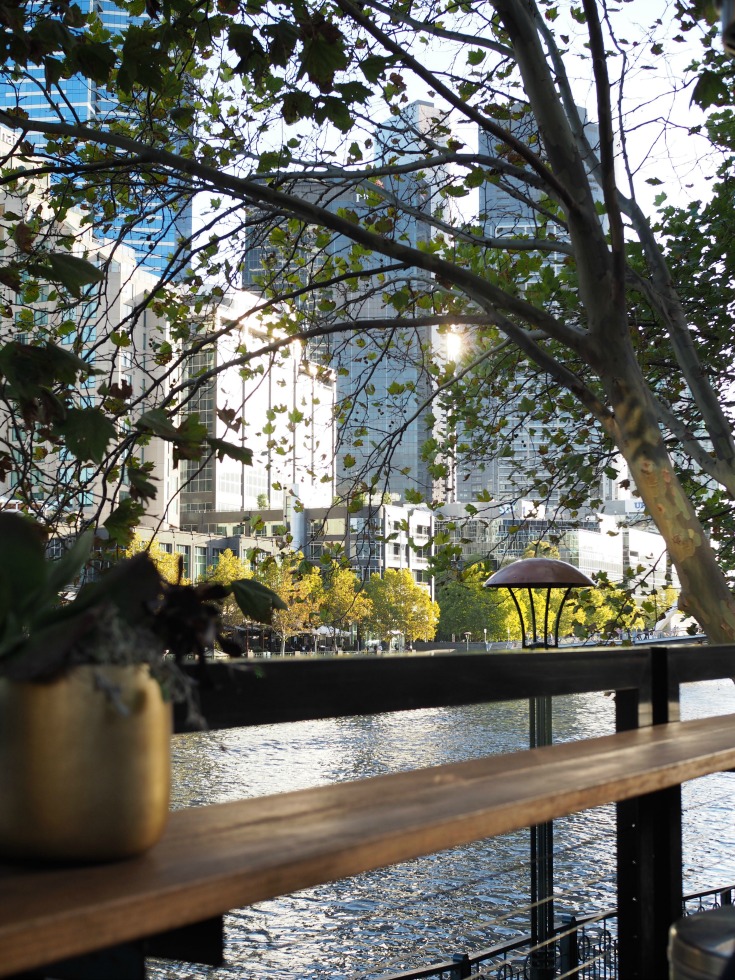 It’s quite surreal to sip wine and delight in the afternoon while mere metres away the afternoon commuters go about their homeward rush. 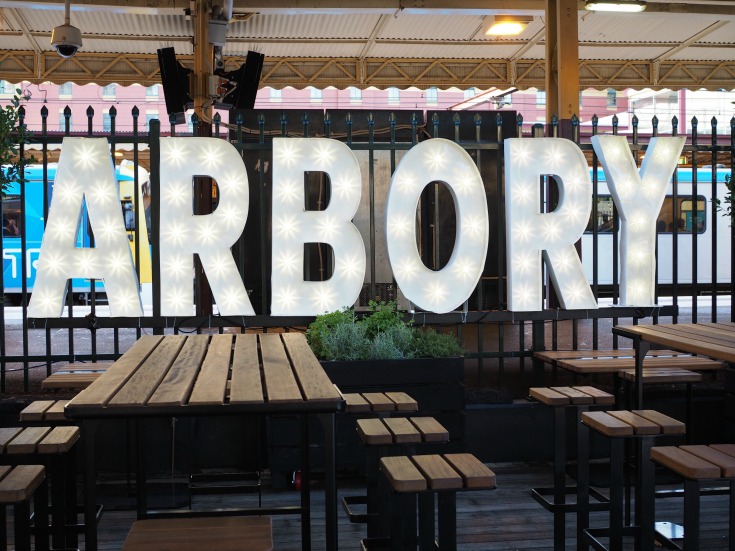 Yep, that’s the train platform in the background.

No matter what you’re after, Executive chef, Nick Bennett (Trocodero, Cicconi’s) and chef Michael Fox (2012 Young Chef of the Year), have you covered.  There is a breakfast menu for the early risers; substantial meals for both the burger-lovers (who isn’t a burger lover?) and the health conscious; a small range of top-notch mains; late night snacks for the lingerers; and the kids aren’t forgotten either.

At the launch we were treated to a range of dishes from the menu.  Many of these are in a full-size on the menu so my pictures won’t give you the best preview. However, I can’t get through a blog post without giving you your dose of #foodporn, so here we go:

Buffalo Mozzarella, artichoke and green sauce (on the menu in salad form). 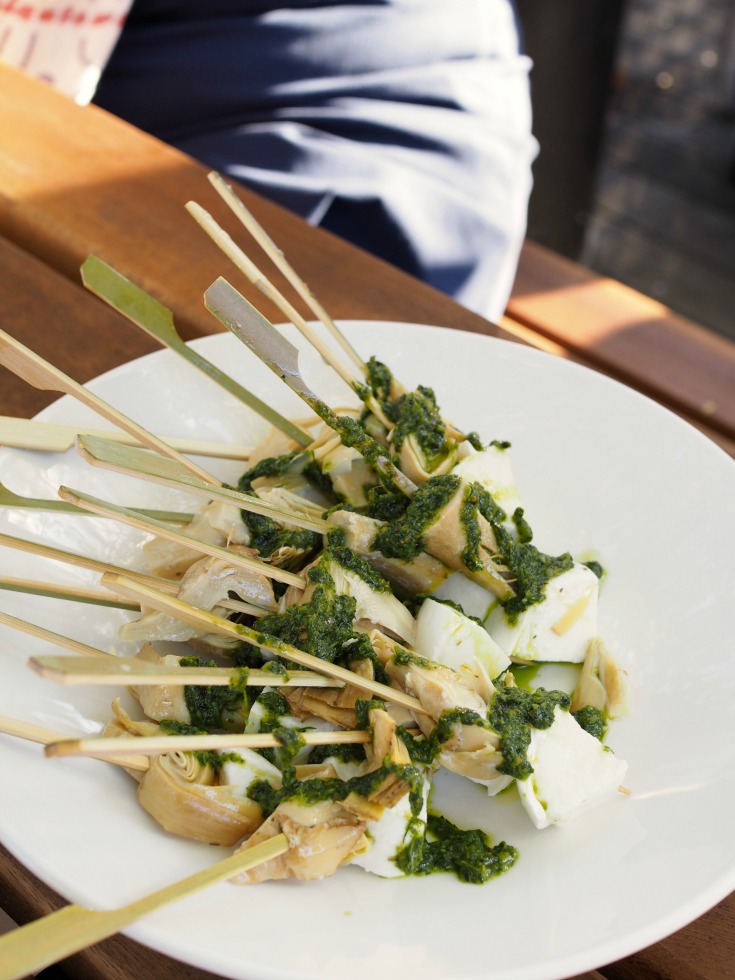 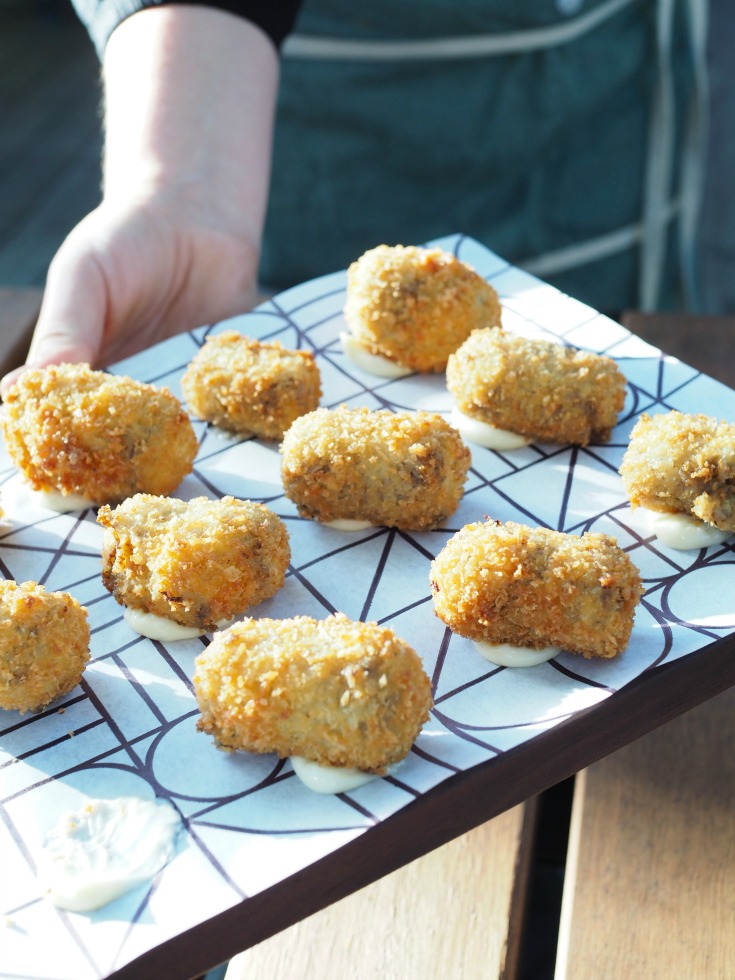 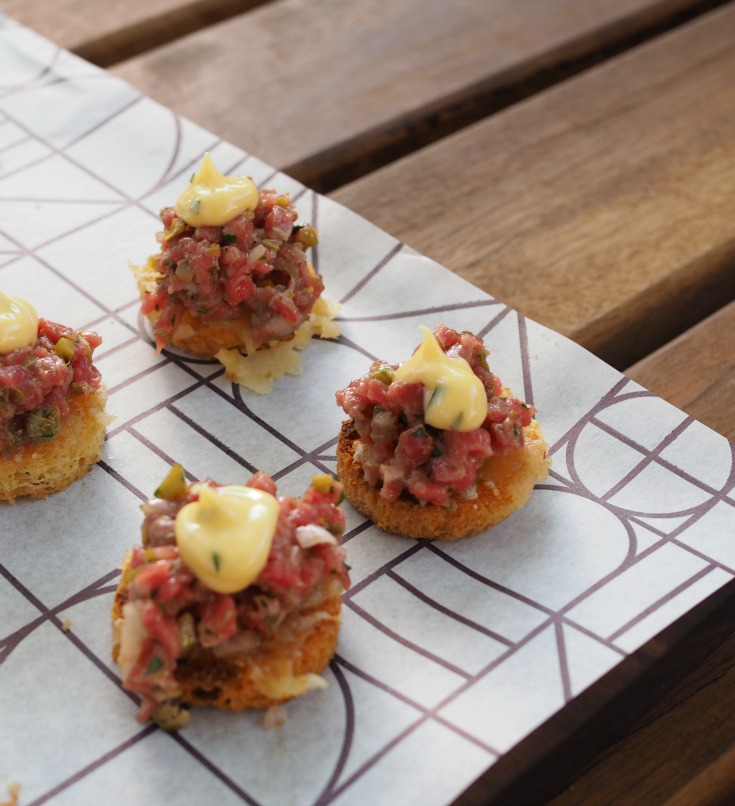 Crumbed mushroom and haloumi slider (full-size burger on the menu) 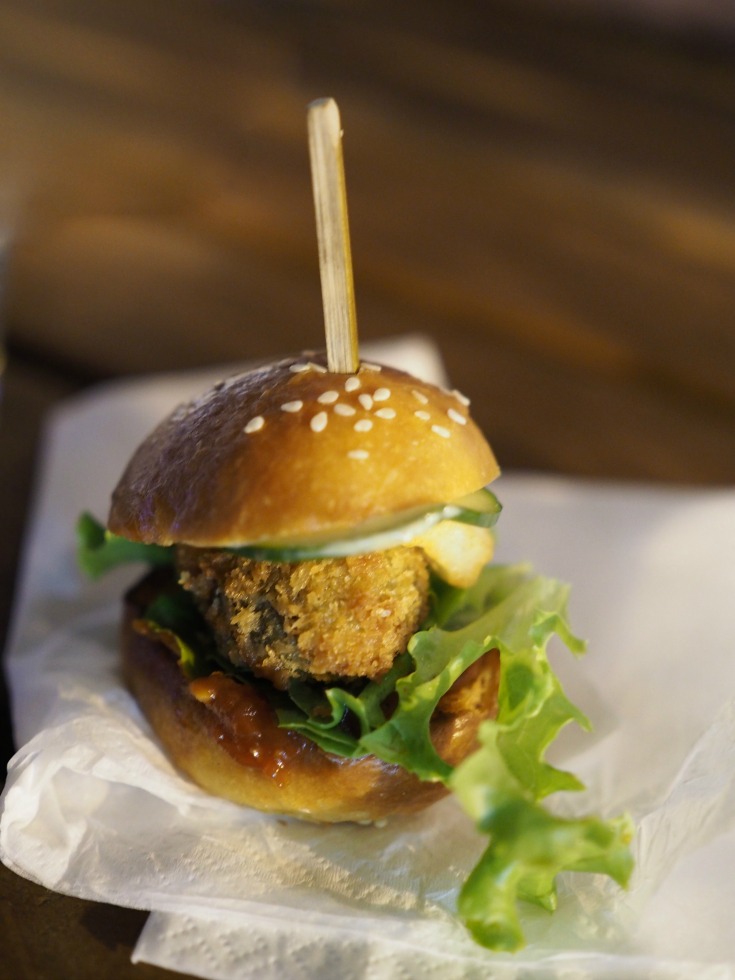 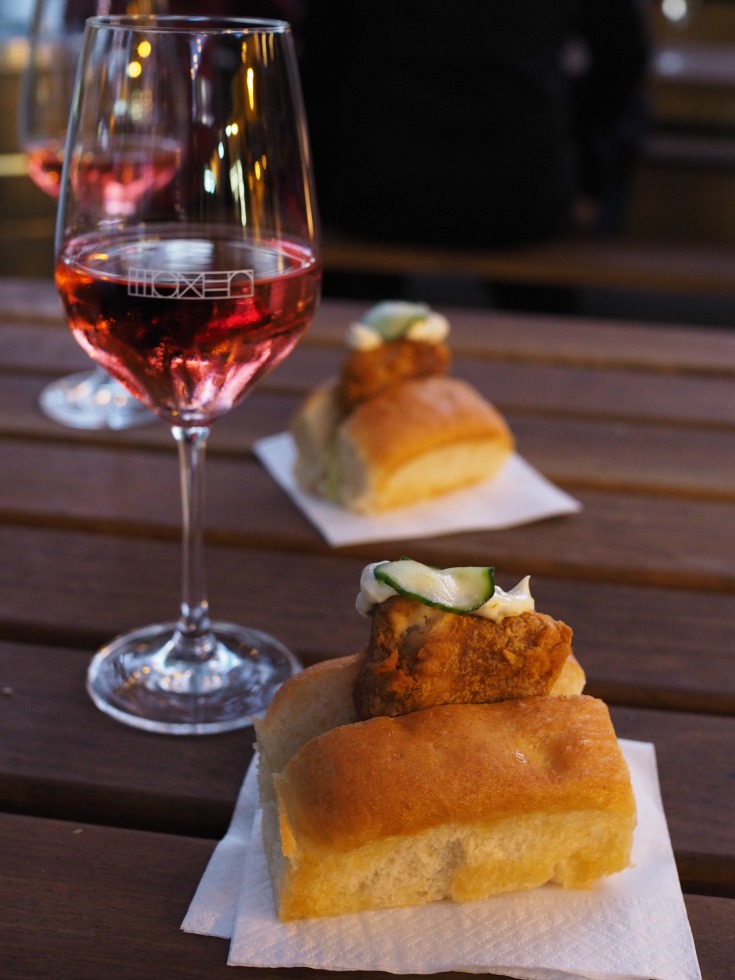 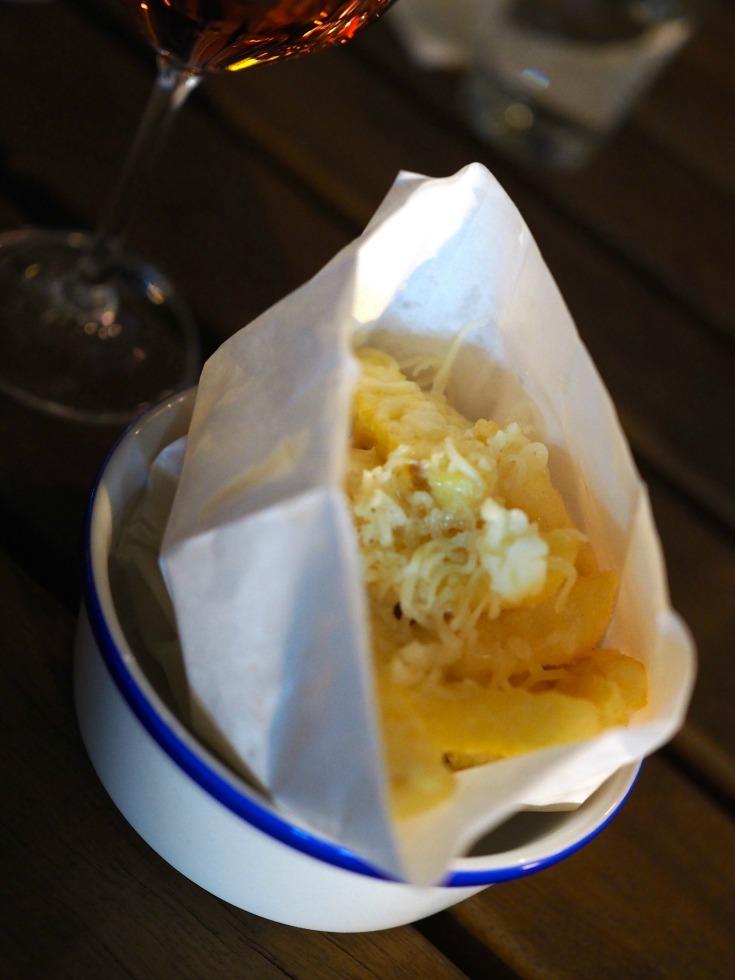 There were popcorn and salted caramel sundaes (with popping candy) for dessert but it was pretty dark by then and my pics didn’t do the rich dark caramel and creamy ice cream any justice. I’ve also seen since that they have a chocolate Guinness cake- heck yeah!

All the food was excellent with a great balance of flavours and textures. If I had to pick a favourite, the chips (well, my blog is called Champagne and Chips) would be up there- crinkle cut chips a lovely hark back to childhood; elevated by truffle salt and pecorino. Also the mushroom and haloumi burger was a thing of beauty.

The food is affordably priced; a meal-sized burger and chips or substantial salad comes in at $15-$16 and mains are in the range of $26-29.

The full list is a one page number put together by Raúl Moreno Yagüe (one of the nicest and most approachable wine gurus I have ever met). There is a good range by the glass and some excellent (bold) choices by the bottle eg. a Slovenian Pinot Gris and a Cabernet Sauvignon from Mongolia, China).

But sometimes you just want someone to bring you a glass of something good and fresh that you don’t have to think about. That’s where D.O.C Wines come in, supplying wine in kegs. Now don’t freak out- this is not the new goon bag. Wine sold by the glass always has a couple of dollars wastage allowance built in. Quite frequently venues have to throw out half a bottle of wine after a day or so because it becomes oxidised. The D.O.C guys have worked out a way of storing wine in an airless keg so there is no wastage. The wine is always crisp and fresh and Arbory can afford to have great quality wine for $7 a glass. Add in brownie points for being environmentally friendly and using local wine (currently from the King Valley) and it’s win-win. 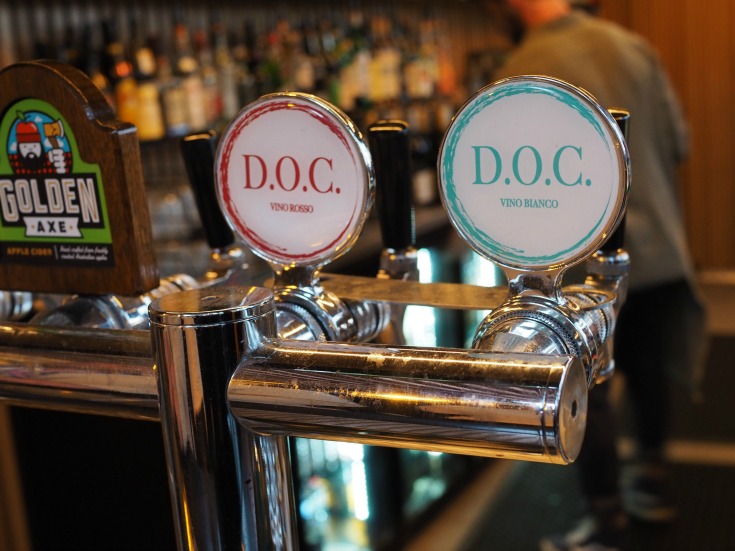 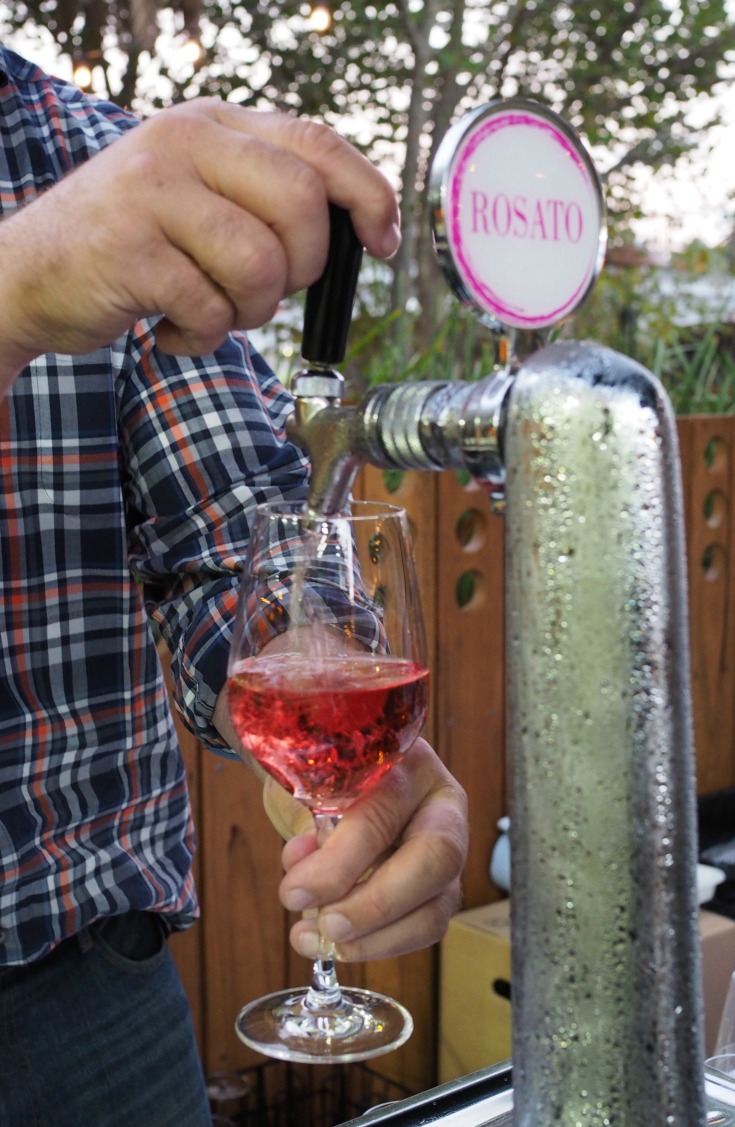 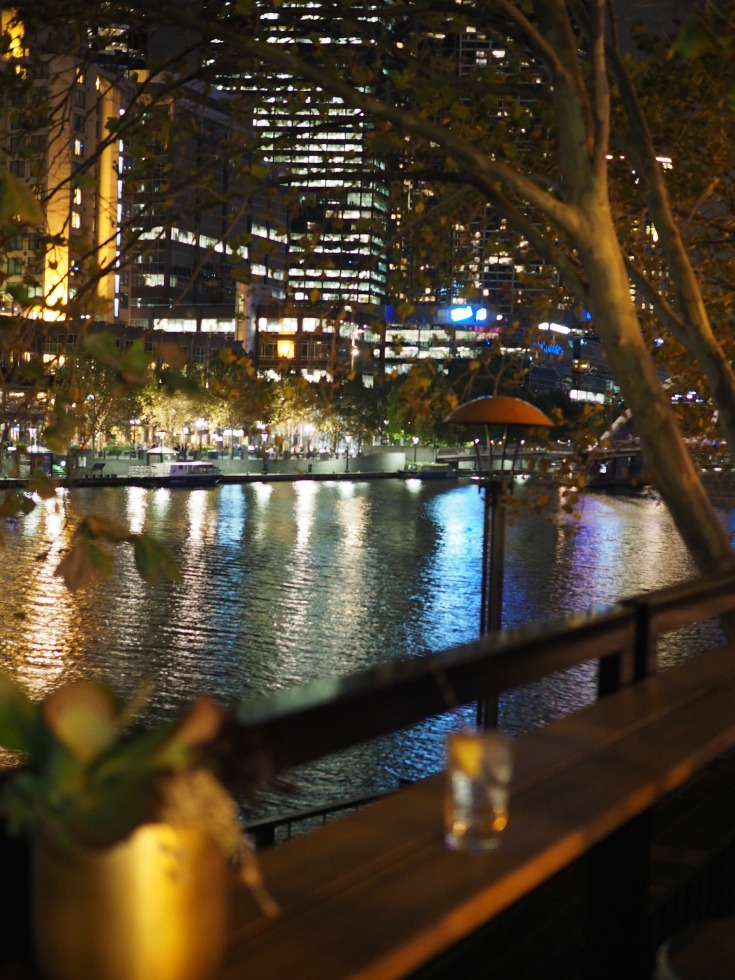 I’ve been to a few launch parties and I have to give an extra commendation to the staff at Arbory. Never have I met such a good-natured crew; happily allowing me to photograph their serving plates and ensuring that everybody was well catered for despite the enormous number of people there.

There are going to be plenty of excited tourists at Arbory Bar and Eatery because I have no doubt it will quickly jump to the top of the list of Melbourne Must-dos. However this place is going to be equally (if not more) loved by the locals. I was completely bewitched by an afternoon spent sipping wine and watching the reflection of the sunset in the glistening water.

Just like Harry and platform 9 3/4, it turns out that the magic is still here, you just have to know where to look for it. 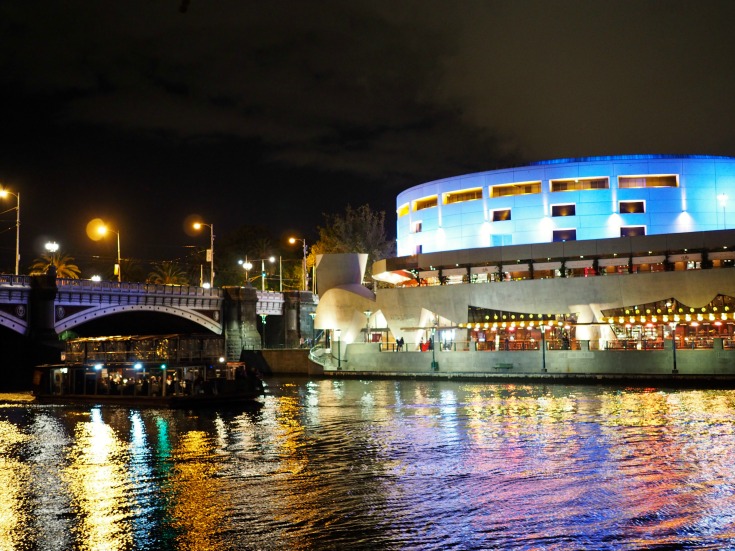 Disclosure: Food and drinks at the launch were free of charge. I did not receive payment for this review and all ideas and opinions are my own.